The Birthplace of Sacred Geometry // What is the Vesica Piscis? 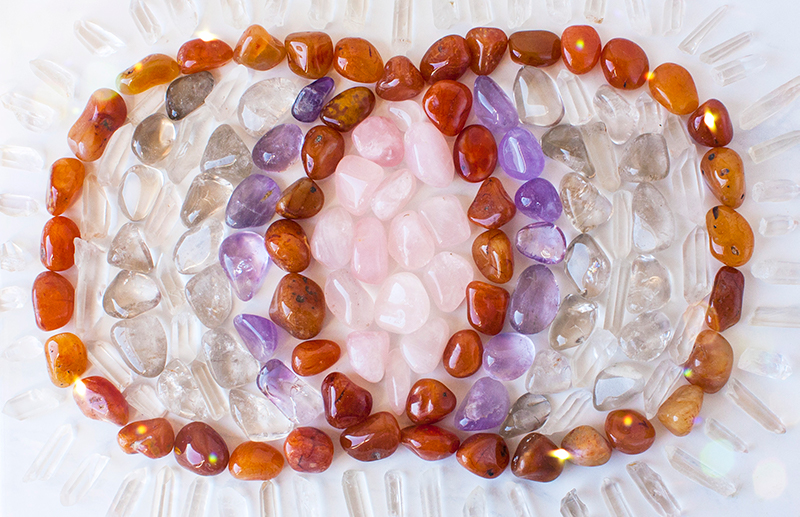 The Vesica Piscis symbol is comprised of two overlapping circles that form an almond shape in the center, also called a “mandorla.” Though the coming together of these circles may look simple, and possibly remind you of fun times in middle school filling out Venn diagrams, its meaning is profoundly powerful.

Vesica Piscis translates to “bladder of the fish” in Latin, this not so flattering or mystical name was given to it due to its similar appearance to a fish bladder. The Italian phrase “mandorla,” or almond, refers to the shape created in the center.

Mathematically speaking, this simple shape is the starting place of very complex geometry. The circles have the same radius and intersect in such a way that the perimeter of each circle touches the center of the other. The almond shape created by the overlapping circles contains two equilateral triangles. For more on the mathematics of this shape, exciting as it may be, you’ll need to do your own research! From here on out I’ll be focusing on the significance, meaning, and uses of this sacred symbol.

Let’s dig into the significance of this symbol and even more important, how you can put it to use in your spiritual practice. 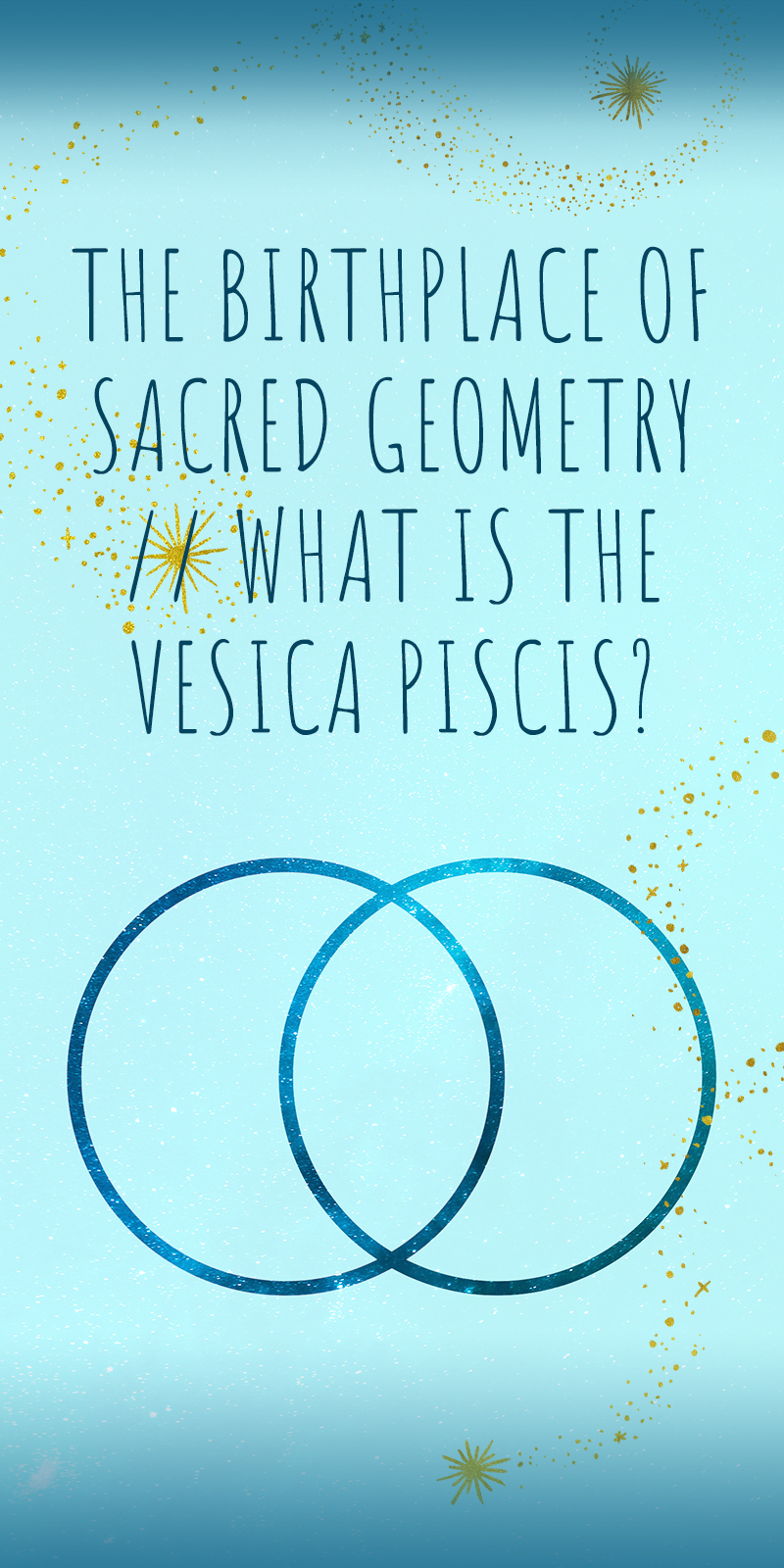 Where did it come from?

The Vesica Piscis was formed first in nature, but when it was first identified by humans as a significant shape is still up for debate. Beyond nature, this shape can be found in paintings of Christ and Buddha, modern-day logos like Coco Chanel, crop circles, and ancient and contemporary architecture. It is also the starting place of the Seed of Life and the Flower of Life. If you missed my blog on these two basic sacred geometry symbols, you could learn more about them here.

Like most sacred geometry, there’s a lot of speculation about the origin(s) and meaning(s) of the Vesica Piscis. Because this symbol is found in so many places, it’s hard to pinpoint where it originated. Many, myself included, believe this simple symbol found all throughout history and nature has a divine source.

What does it mean?

Because the Vesica Piscis symbol shows up so often in nature and human history there are varying meanings associated with it. One thing most people can agree on is that it is a significant symbol.

Some view the Vesica Piscis as a Christian symbol due to its similarities to the “Jesus fish.” It also mimics the shape of the female vagina and is therefore viewed as a symbol of femininity, birth, and sexuality.

From a spiritual viewpoint, if we recognize the circle on its own as Source Energy (God or Goddess, whichever you prefer), the Vesica Piscis represents creation or the “womb of The Universe.” Think of a single circle as a Source of Energy, adding a second circle represents the spark of creation when the universe is born. This idea is enforced with its similarities to the shape of the vagina, the starting place of birth on a human level. It is enforced again by the fact that it is the starting place of most sacred geometry.

How can you use this symbol?

Here are a few ways to bring this cosmic symbol into your practice and honor its sacred meaning.

The almond shape of the Vesica Piscis mirrors the form of the female yoni. If you’re trying to call in more feminine energy or connect to Goddess energy place an image of or create the shape of the Vesica Piscis on your altar. Placing this symbol in an area you use often can uplift the space and bring in more feminine energy. Try enhancing the shape by adorning your space with other symbols and objects that represent femininity like a cowrie shell, carnelian, rose quartz, or roses. 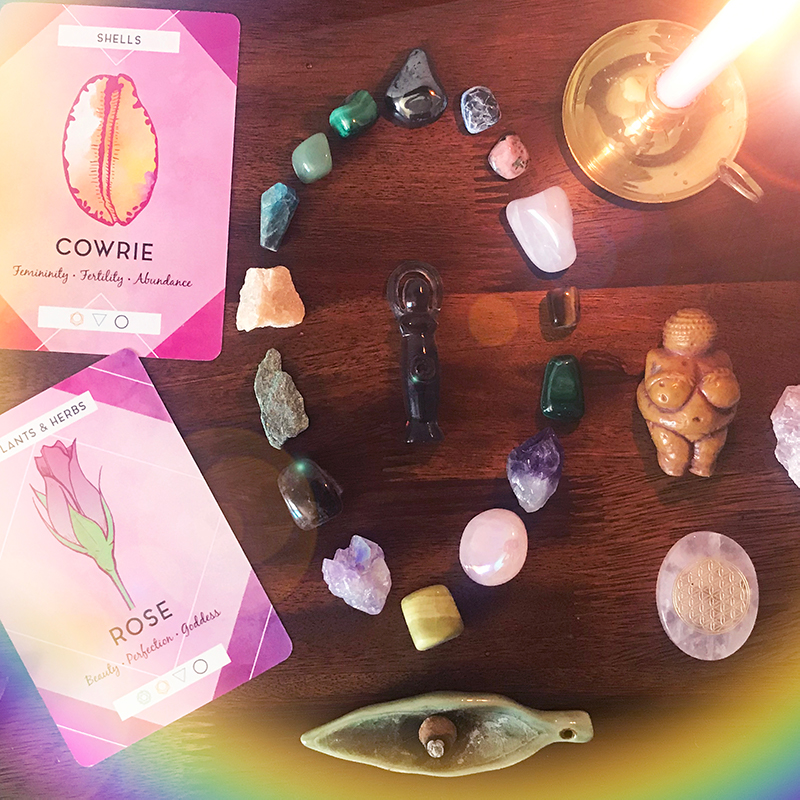 Fortunately, the Vesica Piscis is a simple shape that lends itself to easy crystal gridding! Due to its simplicity, you may not need a diagram, but if you’d like one try drawing the shape or printing one online. I used a Seed of Life grid and formed the grid on one of the Vesica Piscis shapes within it, shown in the image below. Otherwise, arrange your crystals in an almond shape and add any crystal embellishments you desire.

Crystal grids that focus on new beginnings, birthing new projects, physical birth, or manifesting new things into existence are ideal, but not limited to, for the Vesica Piscis. Here’s a list of stones you could use for grids of this nature. Use the ones that best suit your needs and feel free to add more of your own! 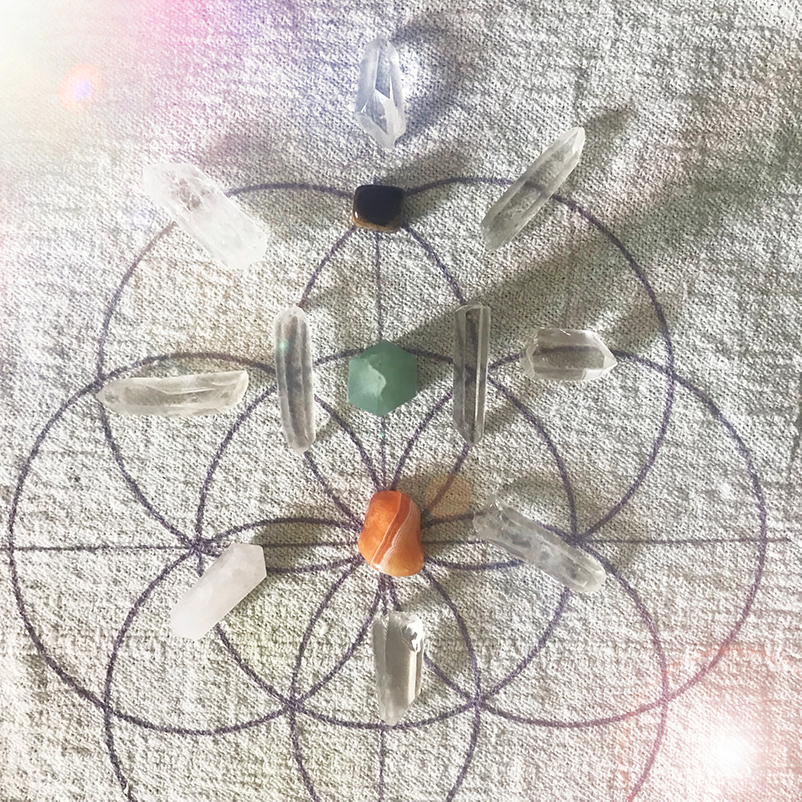 Many believe that the two circles in the Vesica Piscis represent the physical world and the spiritual world, thus creating a portal from one to the other when they overlap to form the Vesica Piscis. If you’re trying to connect to the energy of the spirit world to become more enlightened or to improve your intuition, try meditating on this symbol as you work.

I hope you feel more connected to this powerful symbol and sacred geometry as a whole! Learn more about sacred geometry and find tools to create your own crystal grids in The Goddess Discovery Book.

Cassie Uhl is a published author, artist, intuitive, and founder of Zenned Out. She created Zenned Out in 2012 with the mission to build a brand that normalizes spirituality. In 2018 she self-published her popular and interactive Goddess Discovery Book series. In 2020 her writing and art became more mainstream with Understanding Auras, Understanding Crystals, and Understanding Chakras, published by The Quarto Group. Her writing style and art combine to help marry accessibility with deep spiritual topics. It is her goal to help others understand and live spiritual practices that can change the world. Inspired by her open-minded grandmother, Cassie has been meditating and working with her energy since her teenage years. She received her 200hr YTT in 2012 with a focus on breathwork. Now, her work focuses on energy work, journeying, mediumship, death midwifery, and healing through traditional Celtic shamanic practices.

NEW MOON IN GEMINI RITUAL for visioning a new worl

Many believe the word Beltane comes from "fires of